Clive Cussler Museum
14959 W. 69th Avenue
Arvada CO 80007
(303) 420-2795
Features: Cussler, author of multiple best-selling novels, frequently includes exotic cars and other transportation in his books. This seasonal museum is a collection of cars he owns, some of which have been described in his books. Among the prizes: a 1932 Stutz town car (seen here), a 1953 Allard J2X sports car, and a 1936 Pierce Arrow Berline with a Pierce Arrow Travelodge house trailer.

The Dougherty Museum
U.S. 287
Longmont, CO
(303) 776-2520
Features: The collection includes restored cars powered by steam, electricity and early internal combustion engines. Most of the cars are in running order. Some unusual cars include a 1908 Silent Waverly (seen here), a 1909 Fuller, a 1910 Lozier, several Ford Model A's and several horse-drawn carriages. 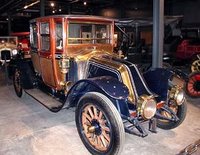 Forney Museum of Transportation
4303 Brighton Boulevard
Denver, CO 80216
(303) 297-1113
Features: Amelia Earhart's "Gold Bug" Kissel, Aly Khan's Rolls Royce Silver Ghost, plus "Anything On Wheels," such as the Forney Locomotive, the Big Boy and other train engines, as well as dining cars, cable cars and more as part of a 500-item collection of antique cars -- such as the 1912 Renault opera coupe seen here, trains, tractors, carriages, cars, buggies and bicycles. The exhibits also include wax figures of the likes of W.C. Fields.

Shelby American Collection
5020 Chaparral Court
P.O. Box 19228
Boulder, CO 80308-2228
(303) 516-9565
Features: The collection represents the race heritage of Shelby American and has on display some of the most famous cars it ever built. The museum also is host to displays of period autos, tools and memorabilia.

Stanley Museum
Lower Stanley Village
P.O. Box 788
Estes Park, CO 80517
(970) 577-1903
Features: This is a sister facility to one in Kingfield, ME. Its exhibits range from history and ghost story tours to virtual tours in a presentation format. With the addition of the museum's 1909 Model R Stanley Roadster, the museum ramped up the significance of the Stanley steam car, its place in automotive and transportation history and an introduction to how it works.


All content copyright 2020 by Circle 7 Associates.
Reproduction in any form without prior written permission is prohibited.
Posted by William M. Dowd at 12:45 AM