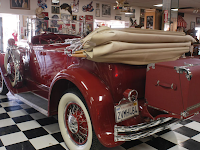 Alford Auto Museum
599 East Main Street
El Centro, CA
(760) 353-3920
Features: Predominately American-Made cars such as Fords and Franklins. The Model “A” Ford Rich Alford bought when he was in high school is included in the exhibit outside. All cars are in running condition and have been restored to their original state.

Automobile Driving Museum
610 Lairport Street
El Segundo, CA
(310) 909-0950
Features: More than 70 antique, classic and special interest cars are on display, including a 1955 Packard Caribbean once owned by the actress Jean Peters (a gift from Howard Hughes) and a 1936 seven passenger Packard Phantom,
purported to be a gift from President Roosevelt to Joseph Stalin. Rides in select vehicles are given on Sundays.

Chandler Vintage Museum of Transportation & Wildlife
Oxnard, CA
Features: This was home to the late newspaper mangate Otis Chandler's extensive collection of vintage and rare automobiles, motorcycles and trains as well as fine art and wildlife. The inventory was sold off in 2008. See an update here.

J.A. Cooley Museum
North Park
San Diego, CA
Features: This is a small facility in one of the city's older neighborhoods. It has 15 cars from 1886 through 1933 plus 25 categories of antiques represented by collections such as model trains, cast iron toys, spittoons, tools, cuckoo clocks, license plates, World War I posters, phonographs, typewriters, and cameras. 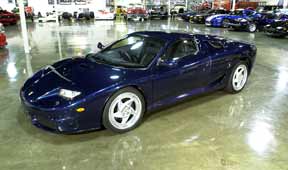 Marconi Automotive Museum
1302 Industrial Drive
Tustin, CA 92780
(714) 258-3001
Features: A $30 million collection includes exotic cars, auto memorabilia, and convention and event space. Included are cars, motorcycles and such special groupings as "Ferrari Row," a line of Ferraris that includes a sapphire-blue Ferrari FX (seen here), the only one in the world. Many of the event proceeds help fund the Marconi Foundation for Kids. 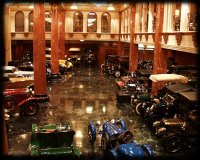 Nethercutt Collection and Museum
15151 Bledsoe Street
Sylmar, CA 91342
(818) 367-2251
Features: This is an upscale facility with a dress code. No jeans or shorts, for example. Besides classic cars, the collection has more than 1,100 hood ornaments, many crafted from Lalique crystal. Among its 200 showpiece cars are a 1933 Duesenberg SJ Arlington Torpedo "Twenty Grand." a 1932 Maybach Zeppelin Sport Cabriolet and a 1934 Packard 1108 Dietrich Convertible Sedan, the "Orello."


All content copyright 2020 by Circle 7 Associates.
Reproduction in any form without prior written permission is prohibited.
Posted by William M. Dowd at 12:46 AM