Boothbay Railway Village
Route 27, P.O. Box 123
Boothbay, ME 04537
Features: What began as a village restoration has morphed into an eclectic collection of transportation memorabilia and village history. The car collection includes such attractions as a circa 1830 one-horse shay, an 1860 carriage built in Farmington, ME, an 1897 Haynes-Apperson Surrey, a 1904 curved dahboard Oldsmobile, a 1923 Ford Model T depot hack, a 1926 Franklin Victoria sport touring car, a 1929 Packard Model 640 limousine, a 1939 Lincoln Zephyr 12 cylinder, a 1941 Willys Americar Speedway Sedan and a 1962 Rolls Royce.

Cole Land Transportation Museum
405 Perry Road
Bangor ME 04401
(207) 990-3600
Features: This is a repository of vehicles and memorabilia that chronicle all areas of transportation in Maine's history. That includes a collection of more than 2,000 photographs, the largest display of snow removal equipment under one roof in America, and 10 fire trucks ranging from a 1910 hand tub to a 1948 Ahrens Fox.

Owls Head Transportation Museum
Route 73 adjacent Knox County Airport
Owls Head, ME
(207) 594-4418
Features: The facility deals with more than 100 historic aircraft, automobiles, bicycles, carriages and engines on permanent display. The aircraft collection contains replicas and originals representing the first century of flight, from Cayley’s unmanned glider (1804) to the legendary Curtiss Jenny of the barnstorming era. The auto collection spans the late 19th and early 20th centuries, and includes the 1963 Prototype Mustang and a 1935 Stout Scarab, called the world’s first mini-van. Only six were made. 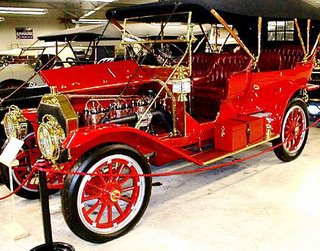 Skyline Farm Carriage Museum
95 The Lane
North Yarmouth, ME 04097
(207) -829-9908
Features: Housed in one of Maine's first indoor riding rings, the horse-drawn carriages and sleighs represent the types of vehicles used for personal tranportation prior to the 1920s.

Stanley Museum
40 School Street
P.O. Box 77
Kingfield, ME04947
(207) 265-2729
Features: This is a sister entity to the Stanley in Estes Park, CO, established in 1981 and located in the Georgian-style Stanley School built in 1903. Kingfield is the birthplace of the Stanleys — important to note because the steam car for which they're most often remembered was built in Watertown, MA. The Museum commemorates and preserves the heritage of the Stanley family that created the famous Stanley Steamer automobile. The exhibits cover all facets of Stanley family history and memorabilia — airbrush painting and photography, violins and examples of Stanley steam cars from 1905, 1910, and 1916.


All content copyright 2020 by Circle 7 Associates.
Reproduction in any form without prior written permission is prohibited.
Posted by William M. Dowd at 12:32 AM