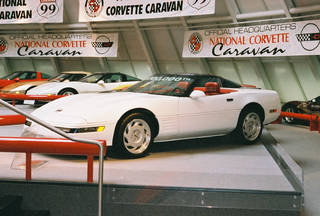 National Corvette Museum
350 Corvette Drive
Bowling Green, KY 42101
(270) 745-8019
Features: Every Corvette is made in the plant here, which is open for tours, and the museum is adjacent to it. The 68,000 sq. ft. building houses more than 50 Corvette models and one-of-a-kind concept cars spanning the history of Corvette since its inception in 1953. Also includes thousands of related photos, movies, videos, advertisements, scale models and rare memorabilia. Inside includes full-scale dioramas showing Corvettes in period settings. The one-millionth 'Vette ever built (seen here) also is on display.


All content copyright 2020 by Circle 7 Associates.
Reproduction in any form without prior written permission is prohibited.
Posted by William M. Dowd at 12:34 AM